NFT Games A Multi Trillion Dollar Industry In The Making

NFT Games A Multi Trillion Dollar Industry In The Making

When it comes to gaming we know that during the 2020 lockdown streaming and gaming exploded. Stock prices and the amount of games being sold daily in these industries has been massive.

Just 1 year ago DeFi hit the markets by storm which I personally believe is what fueled us into a massive crypto rally. Followed by November/December 2020 in which we saw the start of a major push for NFT's and crazy high sales for art work.

Soon after that we ended up into FUD which talked about scams of NFTs, how NFTs are worthless and that sales where way down. That couldn't be further from the truth. In the last few months we have been seeing a MASSIVE increase in NFT's created and traded and from that many of them have been within games.

While there's not much to these games yet you need to understand we are in the very early stages of gaming NFTs. It first started with browser type games and moved into downloadable games and early next year we should see the first MMOs start tapping into this.

Just take a moment and think about the hype around a new MMO for example New World from Amazon releasing the end of August. Now take that and think about what a game like that would be like if every item crafted in the game with a verified blockchain item which you owned. Craft a sword it's yours and you can trade it on the market for crypto.

Yep, that's exactly where crypto gaming is headed and it's going to be freakin HUGE! That's still months if not a year or two away.

For now the most recent hype has been Axie Infinity but there are many other options. Below is a list of NFT games I play myself in no particular order. 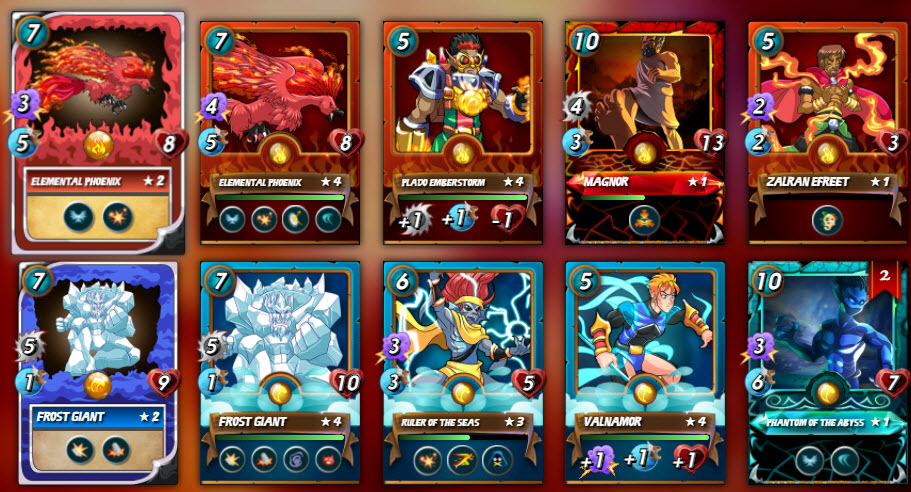 Splinterlands is a collectable class="table table-striped" card game which you use to battle vs others. Winning battles earns you rewards per each battle and then for completing daily quests and placing for the season which happens every 15 days.

Just recently it launched a governance token called SPS which is being air dropped to players.

Later this year Q4 land will be released with crafting and resources which should make it even more interesting!

It's a rather simple game. Collect cards, do daily missions and claim Starbits which is the in game currency. At the moment this takes me about 5 minutes a day to play and is rather passive.

I picked up packs in this when it was first announced but I still haven't unpacked them primarily because I don't want to pay the high ETH transaction fees. I'll admit I haven't kept up with the game much since then however it does seem to be regrowing in popularity and seemed like a solid game.

This game took off during the recent NFT craze and I believe it will again soon once more features get added to it. NFTs for mining went from a few bucks to hundreds and in some cases thousands of dollars over night!

One of the newer NFTs I've run across that looks to be gaining in popularity so much so that the pre alpha stage has a waiting list. I'd recommend joining it so you're ready once this one goes live!